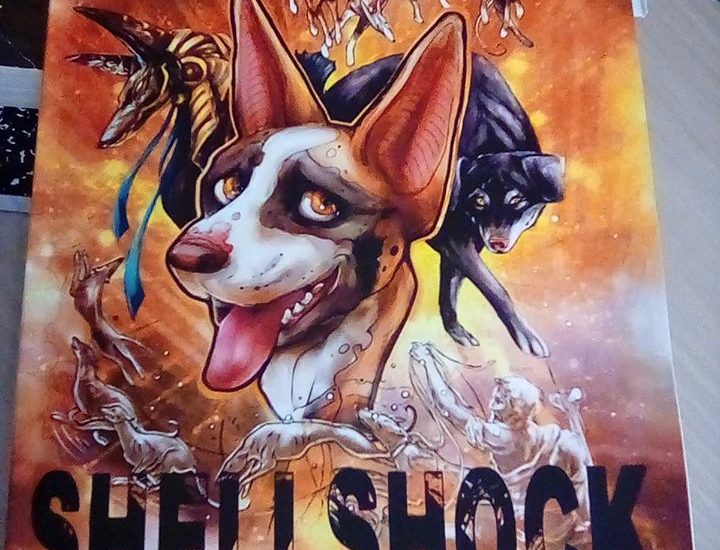 Shellshock – behind the scenes of chapter 1

It all began one sunny day, on a dead end street in Santiago Chile, 2014. That was the day I found a dying discarded pup, carefully placed under a tree by my house, a little bit of food and little bit of water by her side. That day and that dog changed my life. Shellshock is a graphic novel based on the broken little pup that grew into a beautiful swan. It is a heart-warming story that will take you on multiple fantastic adventures and will shed some new light on the magical creatures that dogs really are. 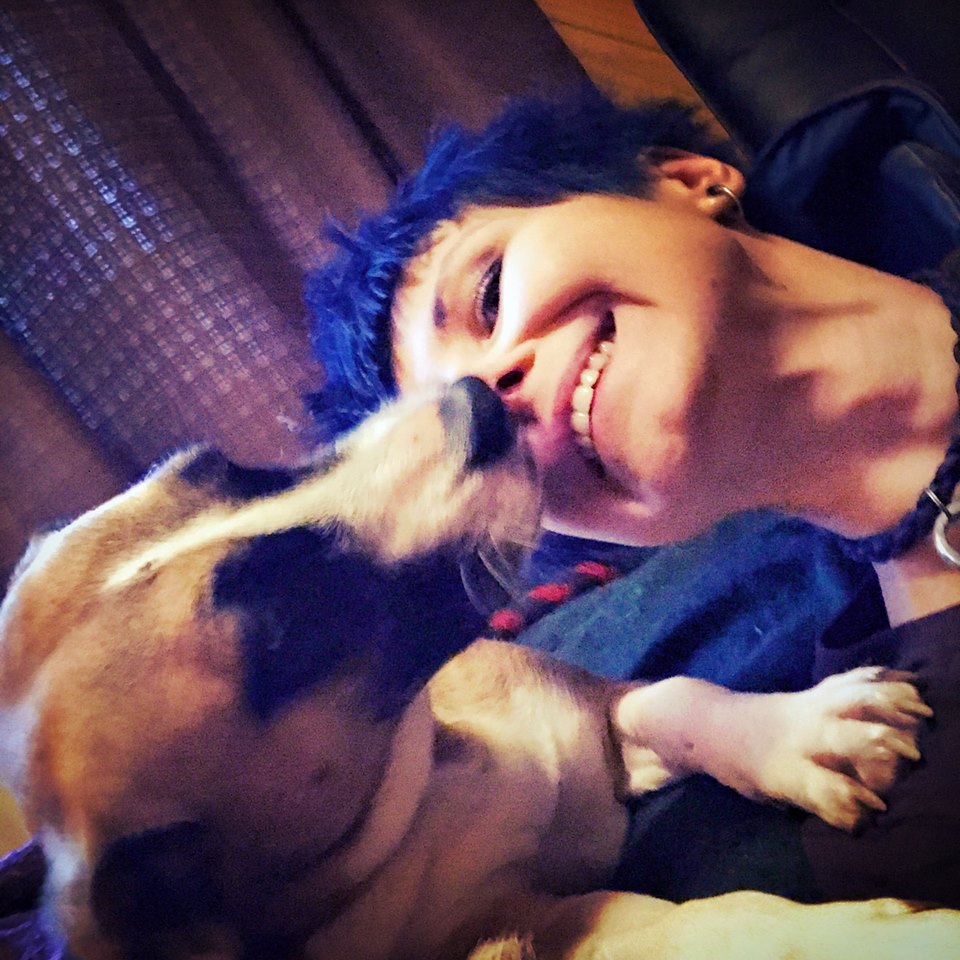 Real life Shellshock is my dog Shelby. She is my best friend and loyal companion. She is a living reminder of human ignorance towards dogs, and also living proof that traumatic experiences can be completely forgotten. There is never a trace of sadness in Shelby’s eyes. Quite the opposite in fact. Her big amber eyes glow with mischief and joy her every waking moment. Her energy is endless and she is always looking for trouble. It is her “human” personality that inspired me to tell her story in illustrated form.

Shellshock is a novel in 6 parts. It tells Shelby’s story through fantasy and adventure. For instance, because we really don’t know who placed her under the tree and why, my husband and I always joke that she just appeared in the “puppy portal” one day. That’s a much better reference to the place where I found her than “the tree where she was left to die by an ignorant coward.” In the book she travels to the puppy portal from ancient Egypt. 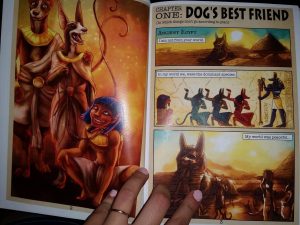 The novel will reveal that in ancient Egypt dogs were the dominant species, and humans were their pets. It was a peaceful world, where pets were loved and cared for. Unlike in the modern world, where dog is supposedly man’s best friend. While some dogs in some parts of the world have very cozy lives, there are millions still who are chained up, beaten, and even forced to race at the track. I wrote this book to illustrate the real problems that dogs today face in South America. I chose South America because this is where I live and these are the problems that are see every day. I didn’t want this book to be heavy and depressing. I didn’t want the readers to feel sad or guilty when reading it. Instead, I wanted each page to be entertaining, funny, witty, and just beautiful. This is why Shelby (or Shellshock as I often call her) is my main character.

Just like in real life, Shellshock conveys no sadness, only joy. Her illustrated character is equally goofy, fun-loving, ridiculous and just plain lovable. By following Shellshock on her adventures through the 6 chapters, the readers will enjoy a good action-adventure, while also picking up on the darker moral dilemmas on a more subconscious level. I want to get people thinking. Really thinking. I believe that cruelty is rare and is a small part of dog problems today. Ignorance, however is a much larger beast. 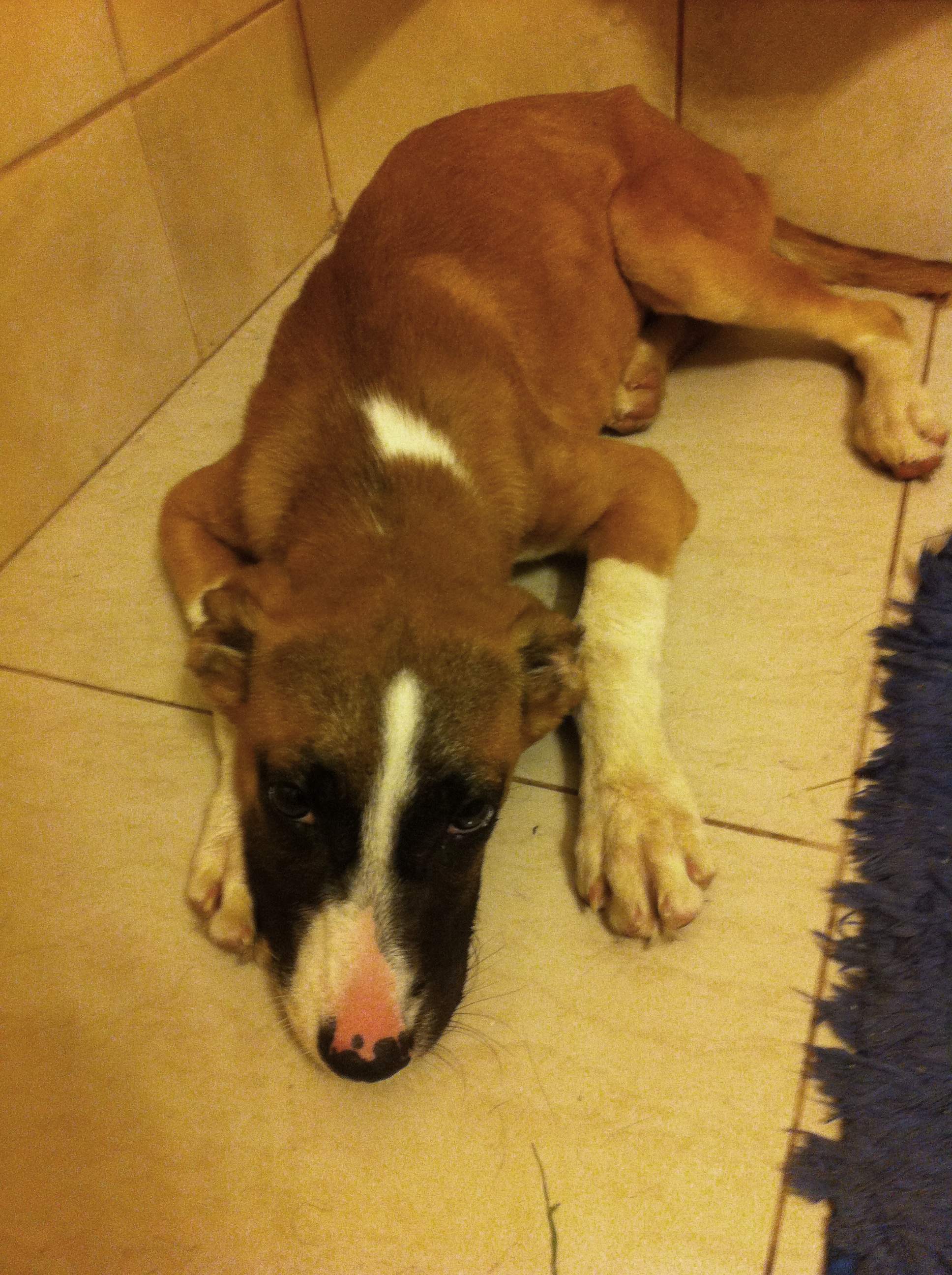 Shelby’s first moments with me.

Take Shelby, for instance. The person who left her under my tree, when she clearly had hours to live, wasn’t cruel. They had good intentions. They placed her in front of a house that already had a dog in the yard. They placed some food a water near her to indicate that she is left there intentionally. But what if I didn’t come out to mow my lawn that day? I shudder to think, even today, that if I was mowing only a day later, I would have found a dead pup instead of my best friend. It was pure chance that Shelby got rescued by me when she did. The person who left her, didn’t think to ring the doorbell or leave her on the doorstep with a note. They didn’t take her to the vet. They didn’t take steps to either heal her or “put her out of her misery.” They just hid her in the leaves, under a tree, on a dead end street. What is that? Cowardice? I say ignorance. That is someone who was never taught how to handle finding a dying pup. They did the best they could and it happened to work out fine. But how many of these stories don’t have a happy ending? 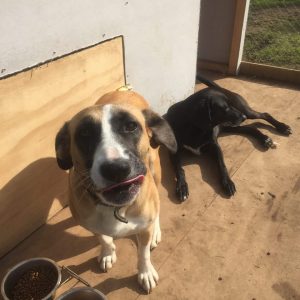 Shelby is a such a colorful character in real life, that it is only natural for me to make her into a goofy cartoon personality. As an illustrator, I love creating characters and their setting. I wrote the entire story in a month, and during the following month I roughly sketched out all the panels for Chapter 1. As I began drawing actual panels and characters, it quickly became obvious that I need a colorist, a great colorist. My strength is character building, but I am also anxious to always move forward, create more panels, set those characters loose on the pages. I don’t have the skill or a patience to paint every panel in full detail. But I know someone how does.

Katherine Dattilo is a brilliant digital painter, who has already collaborated with me on many unrelated illustrations. When we met as artists, we clicked right away. She takes my line work, and breaths life into it with her colors. I wanted her for this project. Kat’s strength in digital painting is light. I don’t know what she does exactly that’s different from other painters I know, but her depiction of light and shadow really takes you to a different realm when you look at her work. She also paints my illustrations in the exact light and mood that I envisioned when I drew the image. It’s like she reads the energy in my lines and translates that energy into something that others can see too. This kind of an artistic relationship is very rare and is priceless. I was thrilled when Kat accepted my proposal to work on Shellshock together. 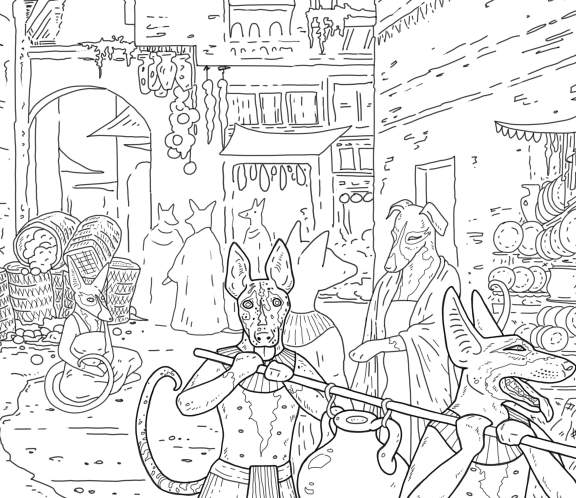 My line drawing of an ancient Egyptian dog market square. 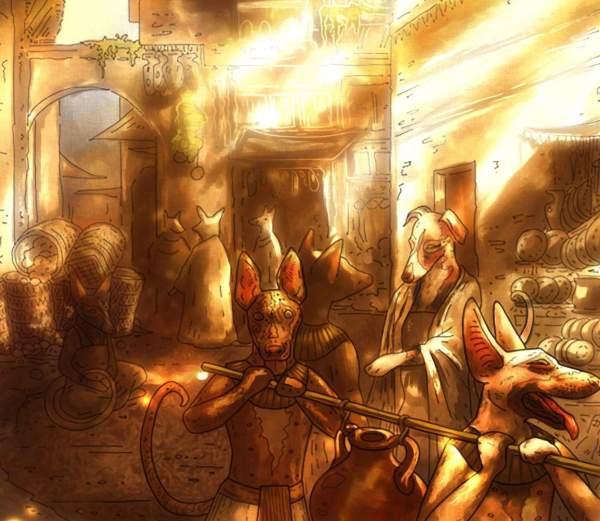 Kat’s magical coloring of exactly how I imagined the place lit.

Chapter 1 of Shellshock is set mainly in ancient Egypt. It took a lot of research both for me in drawing the settings, and for Kat in getting the colors and light just right, to bring our ancient canine Egypt to life. For instance the sky map seen on the wall of the Seers’ workshop, is my dog version of actual ancient Egyptian idea of the sky. 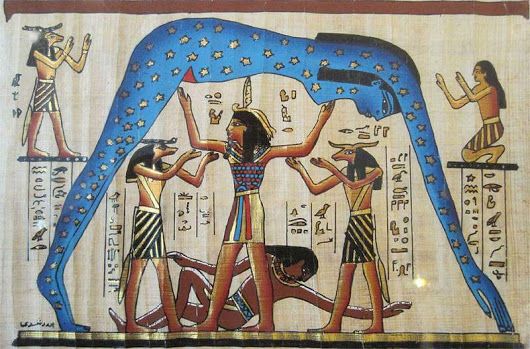 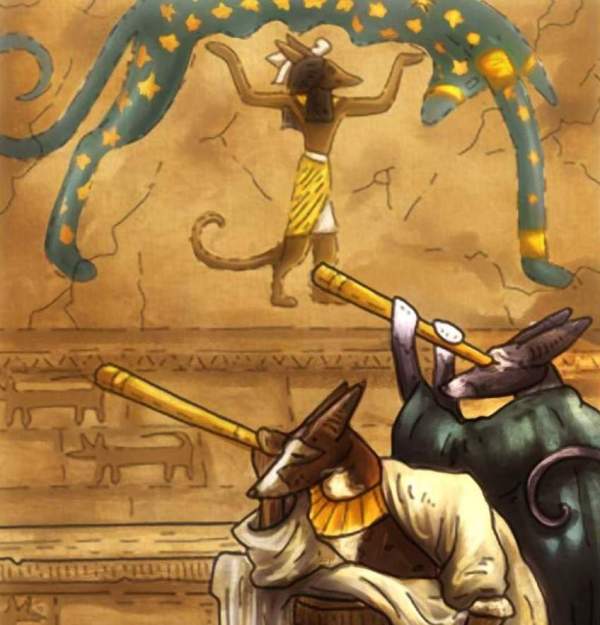 The sky map seen in one of the panels in the novel.

Of course the most exciting part of bringing this book life, for me, is drawing Shellshock herself. In order to depict this amazing character exactly how I envision her, I spend a lot of time chatting with Kat about my Shelby. I sent her many photos, videos, and stories of Shelby’s real life adventures, facial expressions, and crazy dog decisions that she makes. It was very important to me to really capture Shelby’s personality in my book. Kat had no problem transforming my line drawings into my Shellshock. 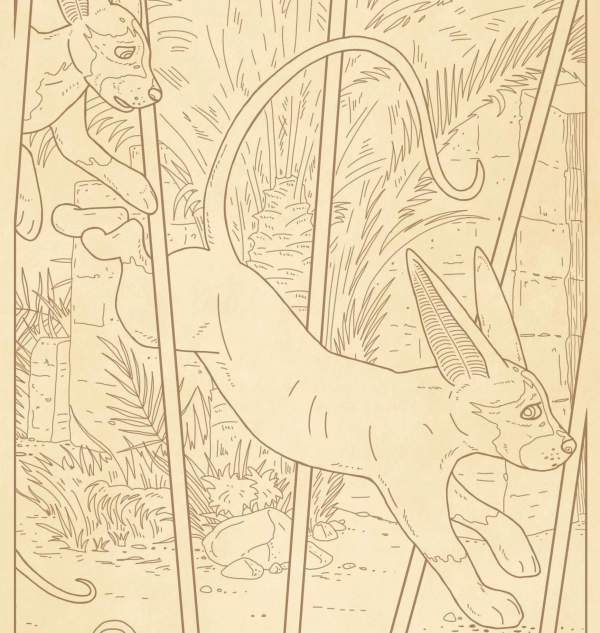 One of the line drawings that I sent to Kat for transformation. 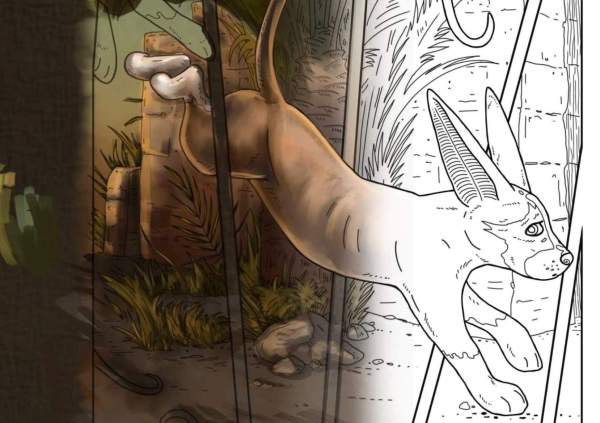 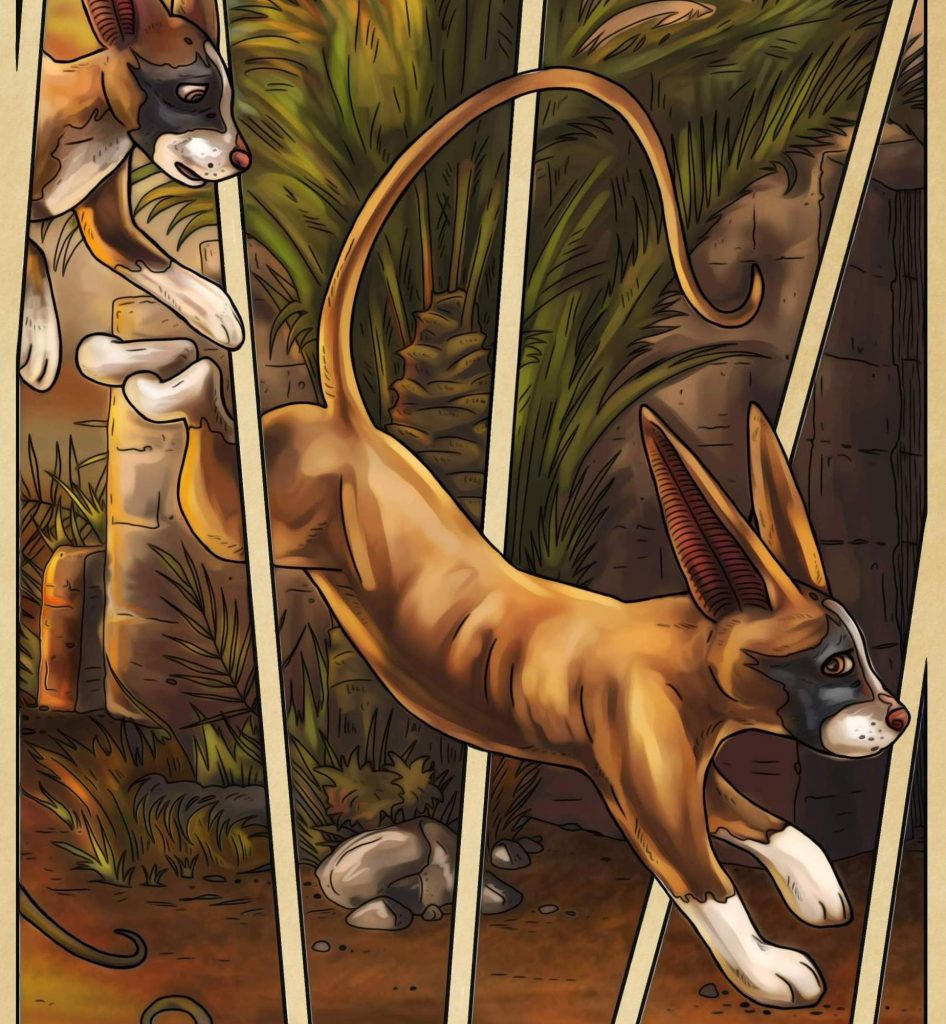 As a special bonus, Chapter 1 also features several behind-the-scenes pages of how Kat and I work. In these pages you will learn some of the technical secrets of our craft.

Can I really be angry at the stranger who left Shelby under my tree? After all, she ended up with me. Where do these broken pups from anyway? Why are there so many dogs roaming the streets of Chile? Why are the ones behind household fences chained up with not even a water dish in reach? Why are there no dog shelters in this country? What ARE people supposed to do when an injured dog shows up on their doorstep? All these and many other questions are the reason for Shellshock the novel. Nothing is black and white in this world, and human cruelty is not the main reason for dogs suffering on a large scale. Lack of education is the main reason. Lack of action. Lack of planning. I aim to change that, one story at a time. 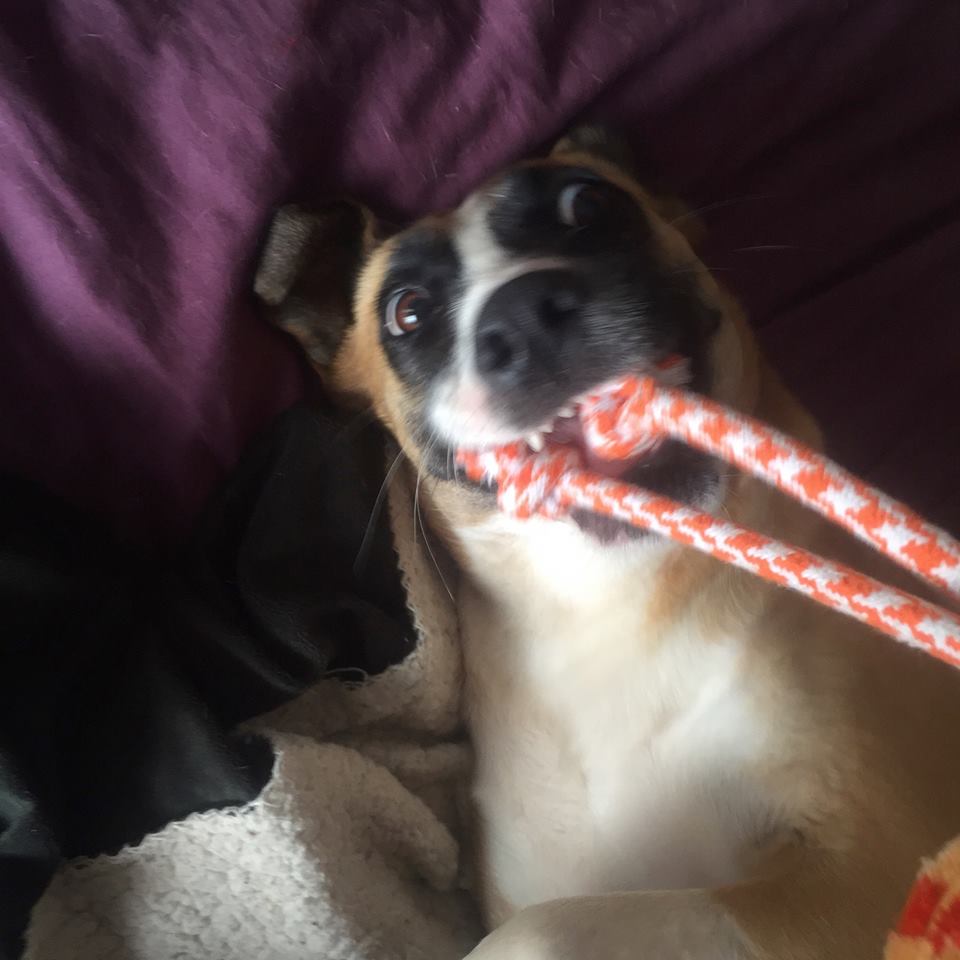 In real life, Shelby likes to tell her story to as many people as she can. She (with my human help) signs petitions against dog racing, including the petition banning racing in Argentina, which we won! Shelby and I also take the time to explain the importance of dog sterilization to locals, to prevent the ever exploding population of feral and homeless dogs here. Feral dogs breed, form into packs and gangs and very quickly become unadaptable. Legalizing hunting dogs (a recent Chilean development), while claiming that sterilization is immoral, is a backwards thinking. Shelby and I like to shed better light on the situation.

One of the greatest reasons for dog mistreatment and neglect in this part of the world, is that dogs are not seen as the amazing, intelligent, emotional creatures that they are. Instead, they are often viewed as objects. They are left behind when a family moves to a new home. Like a piece of unwanted furniture. They are used as alarms when they are kept on chains outside homes. They are used to breed to sell puppies of desirable pedigree. Depicting dogs in a very human way in my book, is one of the ways that I aim to change the view of dogs. In my book, dogs have all the same emotions as we do, and they face all the same problems and dilemmas. I hope that by bonding with my canine characters, the readers will see other dogs in the same magical light.

A fragment of Shellshock’s training scenes in Chapter 1. 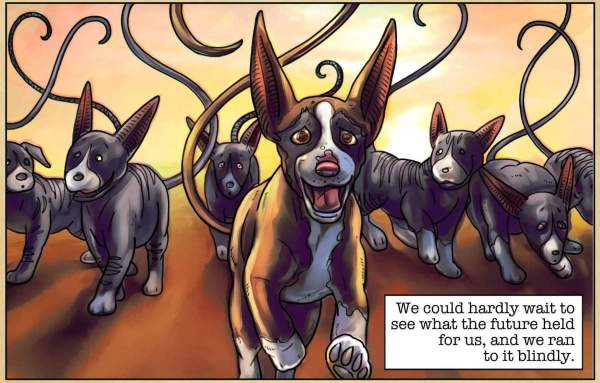 Another fragment from a panel in Chapter 1.

Kat and I also plan to designate a portion of our royalties, every 100 sales, to reputable dog rescue organizations. We will be announcing these events when they happen, with proof of sales and donations.

You can purchase your Shellshock here. It is available in print as well as on Kindle.

If you are already enjoying this book, please take a moment to leave an Amazon review. It will be greatly appreciated.

We also invite you learn more about myself, Kat, and Shelby by following us on Facebook. Yes, Shelby has her own Facebook page, where she posts her real life adventures. She is a very social dog, and she will be thrilled to have more followers. Click on the names below to visit our profiles. 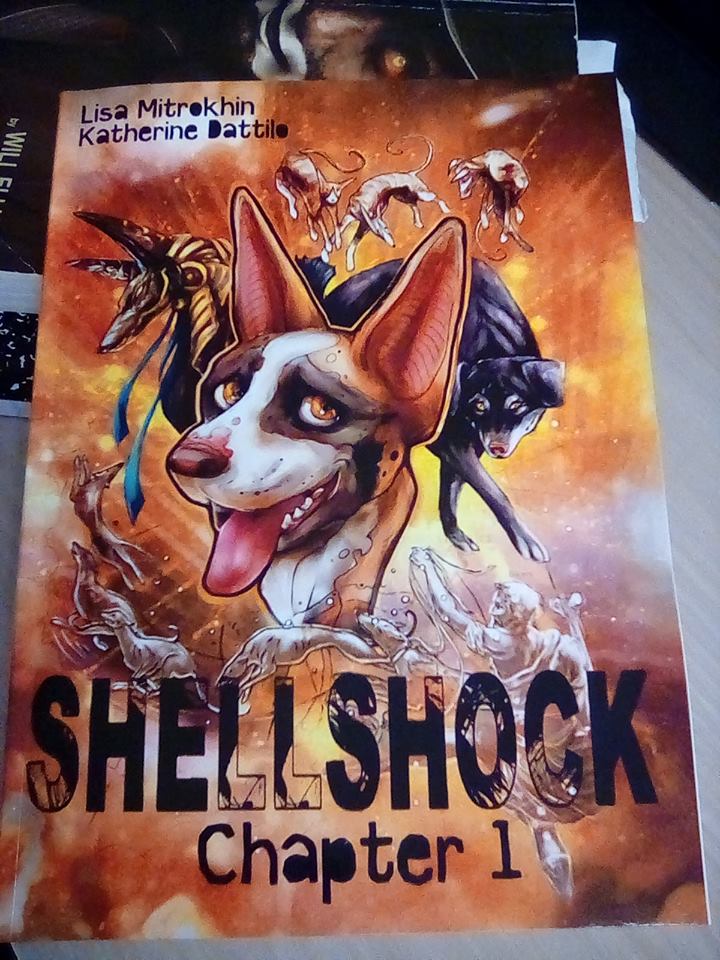 We thank you kindly for your interest and your support. Help us spread the word about Shellshock by sharing this article with your friends and family. 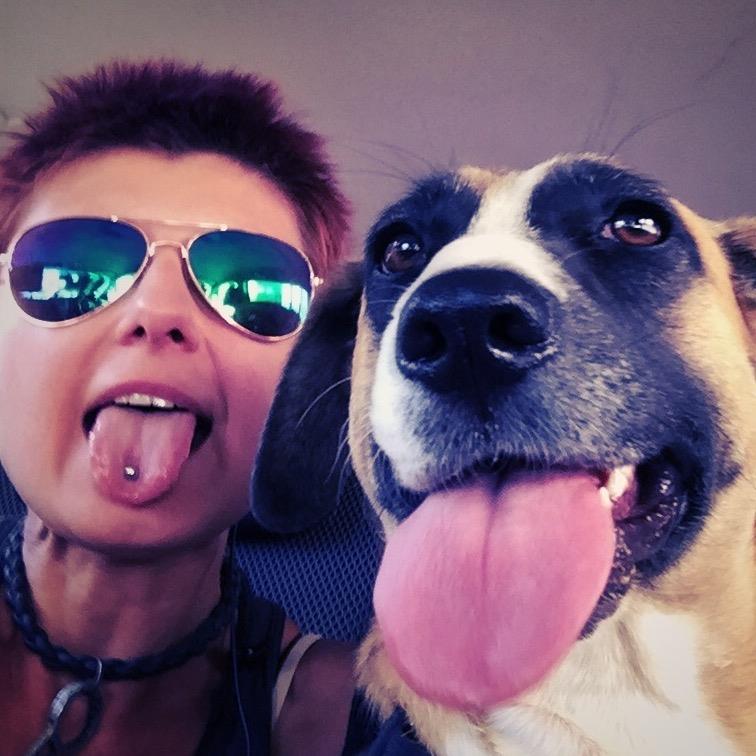 Shellshock and I wishing you a great day. 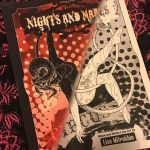 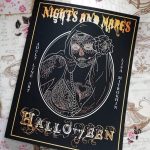