This is the story of the creation of my hand-carved, painted, dressed, styled, and finally animated marionettes, based on two of my favorite entertainers, Neil Gaiman and Amanda Palmer.

Marionettes are arguably the oldest known performers, preceding even human stage actors. From clay and ivory puppets of ancient Greece to 18th-century marionette operas, to modern age Howdy Doody, string controlled dolls experienced an evolution as elaborate as that of their creators. Since we always create in our own likeness, we have given marionettes the very thing that makes us human – an ability to tell tales. In fact, the basic purpose of a marionette is to tell a tale.

Each dancing doll that exists in the world has its own unique personality. That identity is a result of the doll’s material, features, costume, and other visual attributes, combined with the puppeteer’s hand movements. Every individual with his or her fingers on the strings will inevitably project a part of their persona into the doll. In that sense, every puppet is an extension of the puppeteer but at the same time its own being. Much like we all exhibit elements of our predecessors, yet remain unique individuals.

Even though the two dolls you are about to meet are based on two real people, their wooden bodies and hand painted faces couldn’t help but adopt parts of me – their creator, and will soon also take on elements of their new handler. 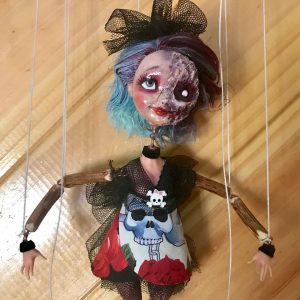 Hel. My very first marionette. She is no bigger than the palm of my hand.

As Nights And Mares Toys, I have been making odd dolls and taxidermy creatures for a few years now, and recently became overwhelmed with the desire to take my creations a step further. I suddenly felt that my dolls need to be more interactive. All of them have back stories and character profiles, but now they must be able to tell their stories themselves and also to tell new stories in the hands of their new owners. The first puppets that I made were mainly constructed from various combinations of discarded doll parts that I hand painted to give them the personalities that I envisioned. This was a fun experience that produced several delightful creations, but the characters were still very much limited by the plastic body parts that I was working with.

Patches. A commission clown boy puppet. A hybrid of doll parts and my first wood carved limbs. (Only partially assembled in this photo)

It quickly became apparent that I had to somehow sculpt or carve all the parts of my dancing dolls to have complete control of the outcome. Since I live on a forested plot of land, wood was an obvious choice. I had never carved anything significant before, but that didn’t stop me. After all, at some point, I had never drawn before, and never cleaned an animal skull or tanned an animal hide. One way or another I figured all these things out.

Around this time in my doll making evolution, I was having very curious conversations with my long-distance friend and fan Laurie, who is a dedicated doll and curiosity collector. We were spending hours chatting about characters in her head that she had me sketching, our parents’ effects on our psyche, the importance of dolls to individuals of all ages, and the perceived differences between games, acting, and reality. One day our conversation shifted to storytellers, and naturally lead to our mutually favorite modern-day storyteller Neil Gaiman, which obviously lead to his relationship with Amanda Palmer, who just happens to be one of my favored performers as well, and the very epitome of a living doll. I always admired how she uses her whole body as an instrument of her art, not just her voice and her words.

It had to be done! Our idols had to be made into marionettes. Laurie commissioned the pair to be 100% hand made from scratch, carved out of wood, painted, costumes sewn, hair and headdress styled to perfection. She requested that they be recognizable caricatures of the real Neil and Amanda, and she requested that it be possible to release them from their strings easily should she wish to enjoy them with no strings attached. Finally, she requested that they be dressed in their wedding clothes, or a variation of the wedding outfits, using elements of other costumes that would make the characters unmistakably a married couple. She sent me a box with carving knives and a wedding veil and nudged me to proceed.

With my instructions, my favorite Dresden Dolls albums over the speakers, and The Graveyard Book on my nightstand, I set out to gather and prepare wood, make my sketches, measure, carve, sew and otherwise do my magic. Several weeks, two destroyed fingers, and a very peculiar ever-hurting knot in my left shoulder later, our wooden couple came to life. 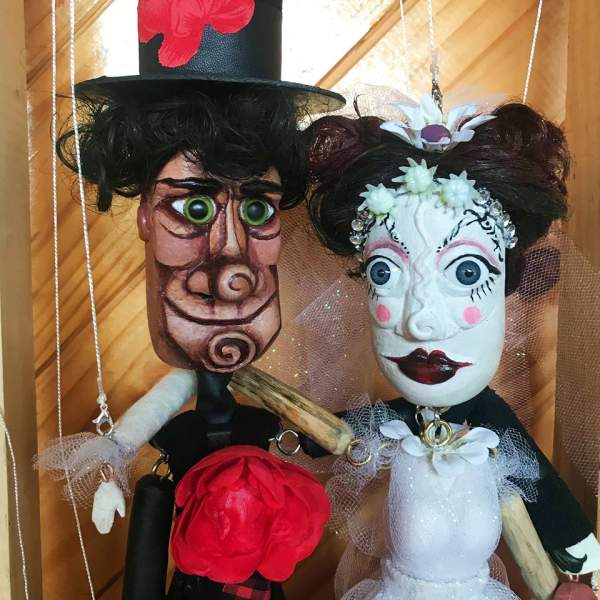 The perfect couple complete at last. 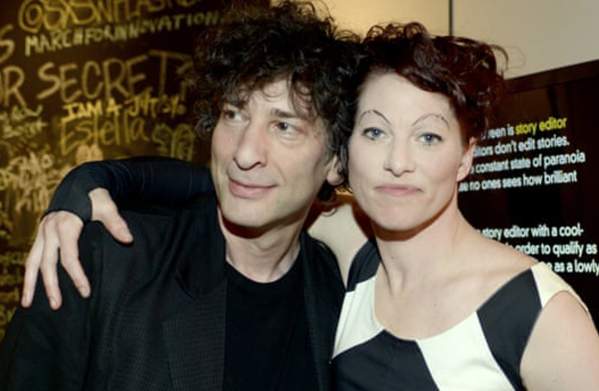 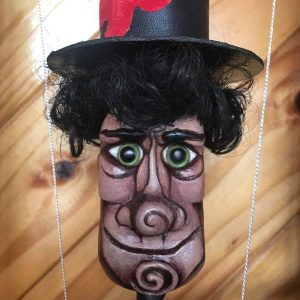 Neil was the first of the two that I carved. As is often the case with art, drafts and first attempts are in danger of being destroyed. I had spent days carding his first face setting the eyes and cursing for hours while attempting his hair, only to sleep on it and ditch the creation the following morning. The second Neil head was a much bigger success. This time it took me only one day to carve, polish and decorate the face, cut, dye, and style the hair, and construct a top hat. Since I did not have hazel colored doll’s eyes, I had to use clear ones that I painted the desired shade of greenish hazel on the back before gluing them on.

The rest of him was mostly hours and hours of polishing the wooden limbs with various grades of sandpaper. I finished several audio books and watched an entire season of American Gods during this very tedious time, only to discover that I did not need to finely polish the arms and legs because they were to be dressed in black velvet and leather anyway. Well, at least the fabrics look very smooth on him.

Since marionettes are assembled in parts, with head, torso, and limbs connected by tiny metallic joins, they can be very unruly and wiggly to work with. To keep things manageable and also to have a nice perspective of where everything goes and how it will work with gravity, I constructed a very basic frame on which to hang my creations while I am building them. Suspended in mid-air, the dolls are much easier to manage. 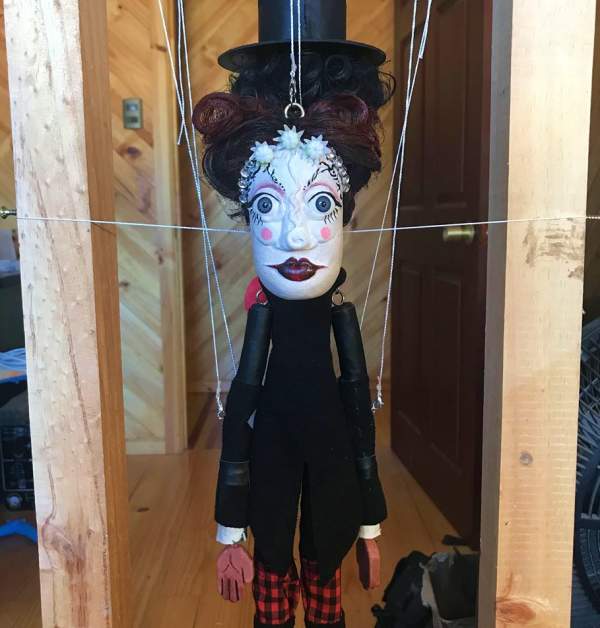 Amanda doll’s head hanging on a frame, complete Neil doll behind her.

After Neil was completed, I flipped my frame around and began crafting Amanda with her back against Neil’s. This also allowed me to control her height and dimensions of her limbs in comparison to his. I wanted her to be slightly more petite. Perhaps it’s because she was my second carved doll, or perhaps it’s because she is a woman and therefore more complicated by nature, but Amanda ended up being a far more complex doll to put together. The amount of detail that went into the creation of her face and styling of her hair took close to 12 hours.

I didn’t even get to put my limb polishing lesson to good use with her. Unlike Neil, Amanda has a lot more skin exposed. So, patiently, I polished four arm twigs and four leg twigs. Adding adorable little hands and the most precious, tiny, hand-made, laced, leather boots, complete with tiny puppet boot soles. You can probably tell I had a lot of fun with the boots. 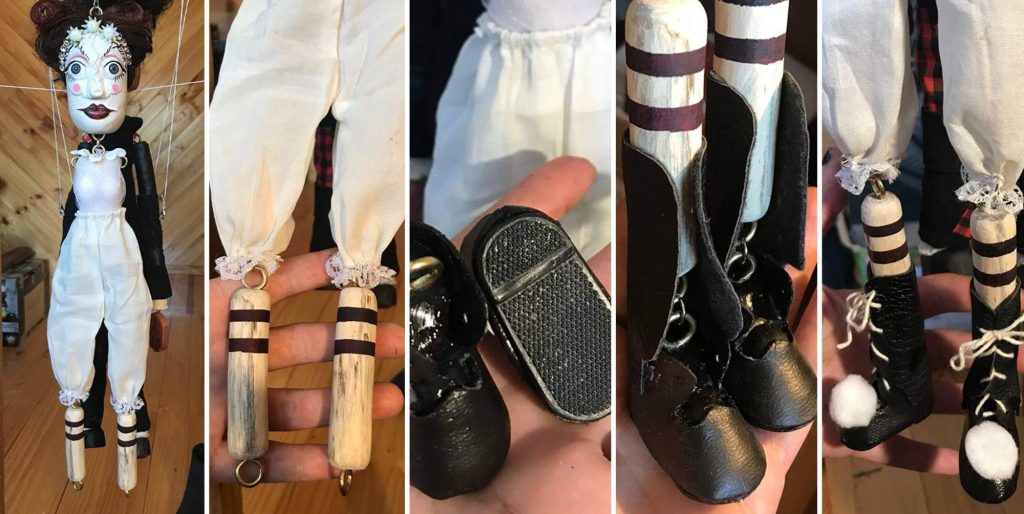 The making of Amanda’s boots 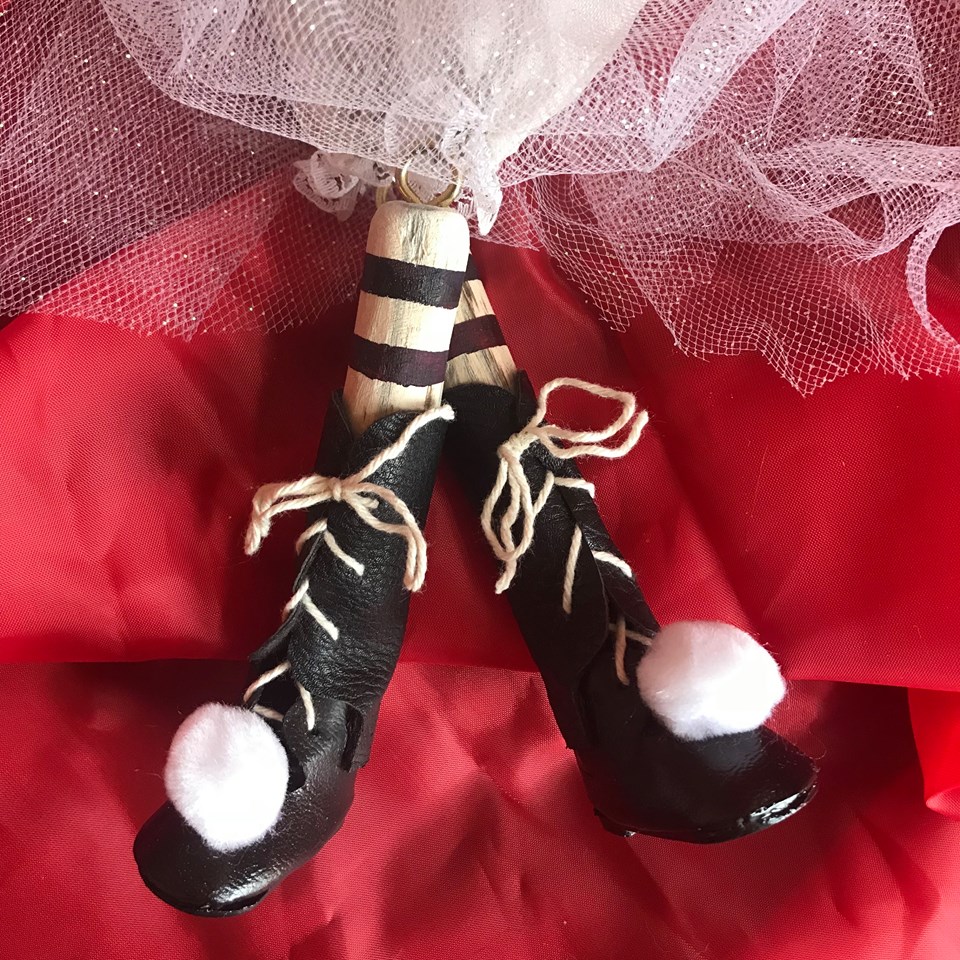 The final details are, of course, the best part of any long term artistic project. When everything hurts from having been sitting in the same awkward pose for weeks, living on coffee and ramen noodles, you finally get to display your creations and study them scrupulously. I spent another full day, checking all the little details, making sure that all the attachment points are secure and correct, that no painted parts need touch-ups or corrections, that the hair will actually stay the way that I styled and clipped it, that the limbs move naturally in all required directions, and of course that the dolls are perfectly balanced still. Although at this point, if they weren’t, it would take a whole lot of work to fix that. Balancing happens along the way mostly, but adding garments and accessories can throw it off somewhat.

Laurie’s main requirement, besides the obvious caricature likeness, was that the strings on these dolls can be easily removed. So I fashioned little rings that are barely visible and pretty much weightless, that I attached to the garments near the joints. The strings, in turn, have delicate necklace clasps that can be attached to or removed from the tiny rings. This way, the strings never have to be taken off the handle, get tangled or lost. They can remain in their permanent places, labeled for ease of future use. The doll can simply be freed from the strings, with the head string being the final load-bearing attachment point, and arranged a free doll. 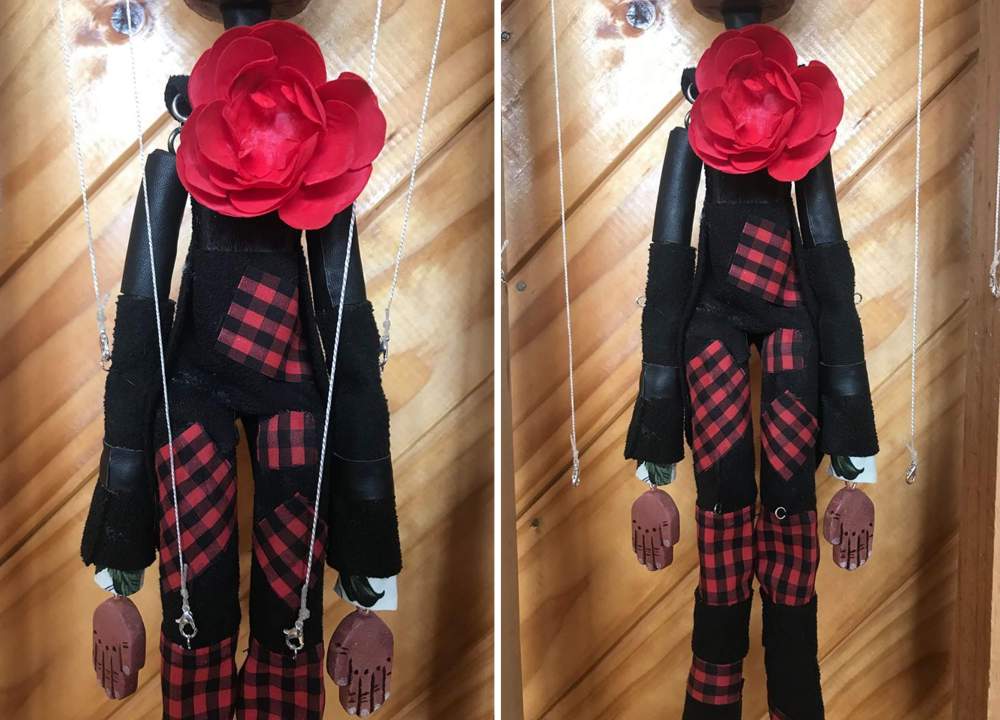 Neil with and without strings attached

The photoshoot with the strings off was a blast too. I discovered that my dolls are far more flexible and interactive than I even imagined they would be, capable of taking all sorts of fun and life-like poses. Amanda especially has very expressive arms and hands, an often likes to sit with one knee up, while reclining back with both arms behind her head. That or cuddling with Neil. 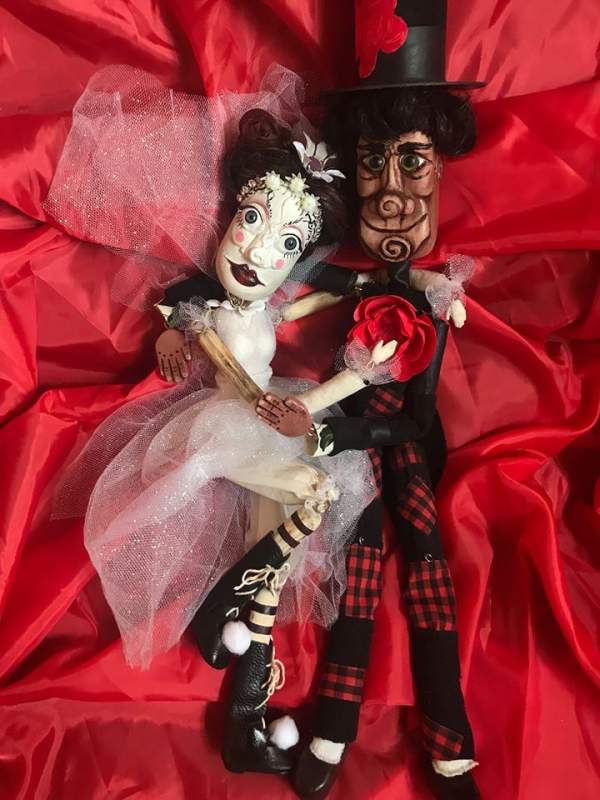 No strings attached. Neil and Amanda dolls in each other’s arms. 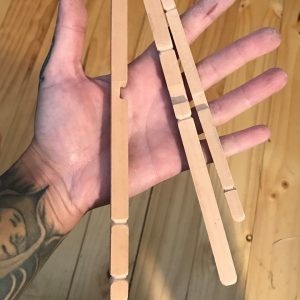 Laurie also specified that she wants the handles to be lightweight, durable, easy to use with her petite hands, and obvious about which string goes where. I carved wooden planks with designated places for all the strings, carefully tailored to each doll. The strings are attached securely and permanently to the handles, and each is labeled with the name of the corresponding joint on the doll. Looking down on the handle, the puppeteer will see four headings: F, B, L, R, for front, back, left and right, and fully spelled out joint attachments: wrist, elbow, knee. When the strings are unclasped from the dolls, they remain hanging to be easily identified for later assembly. 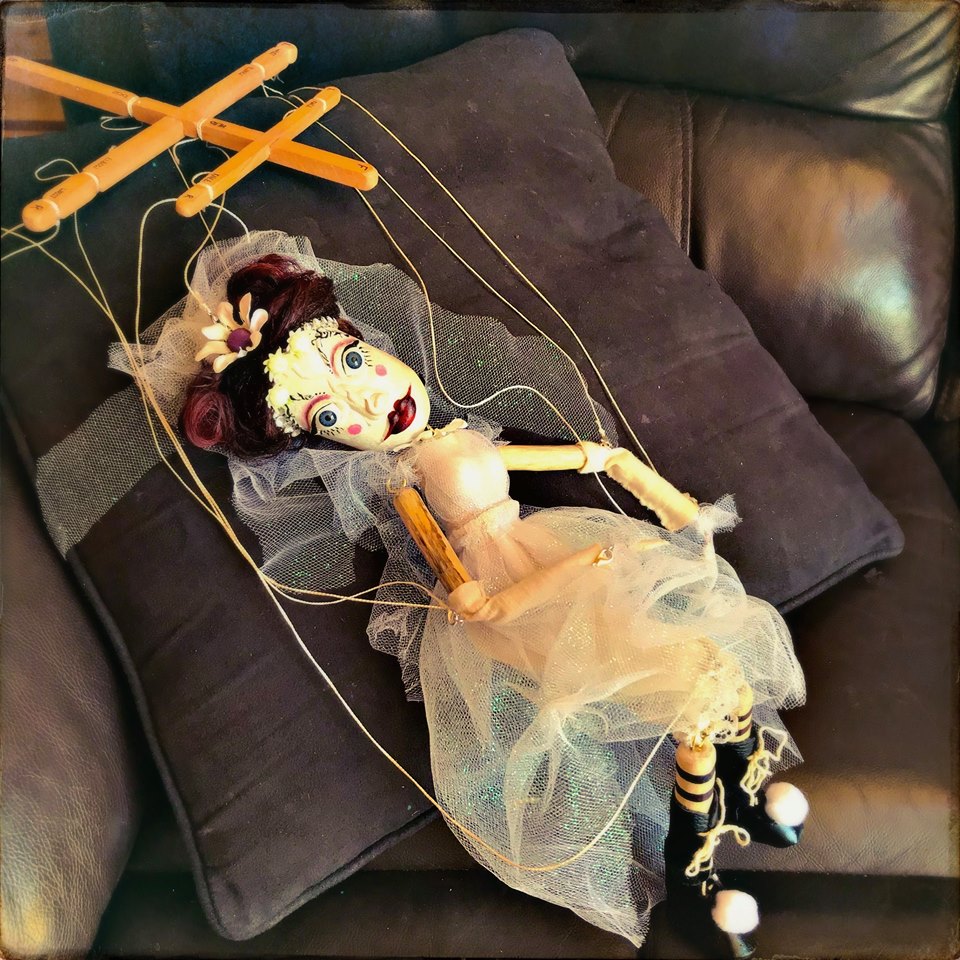 Amanda chilling on the couch. 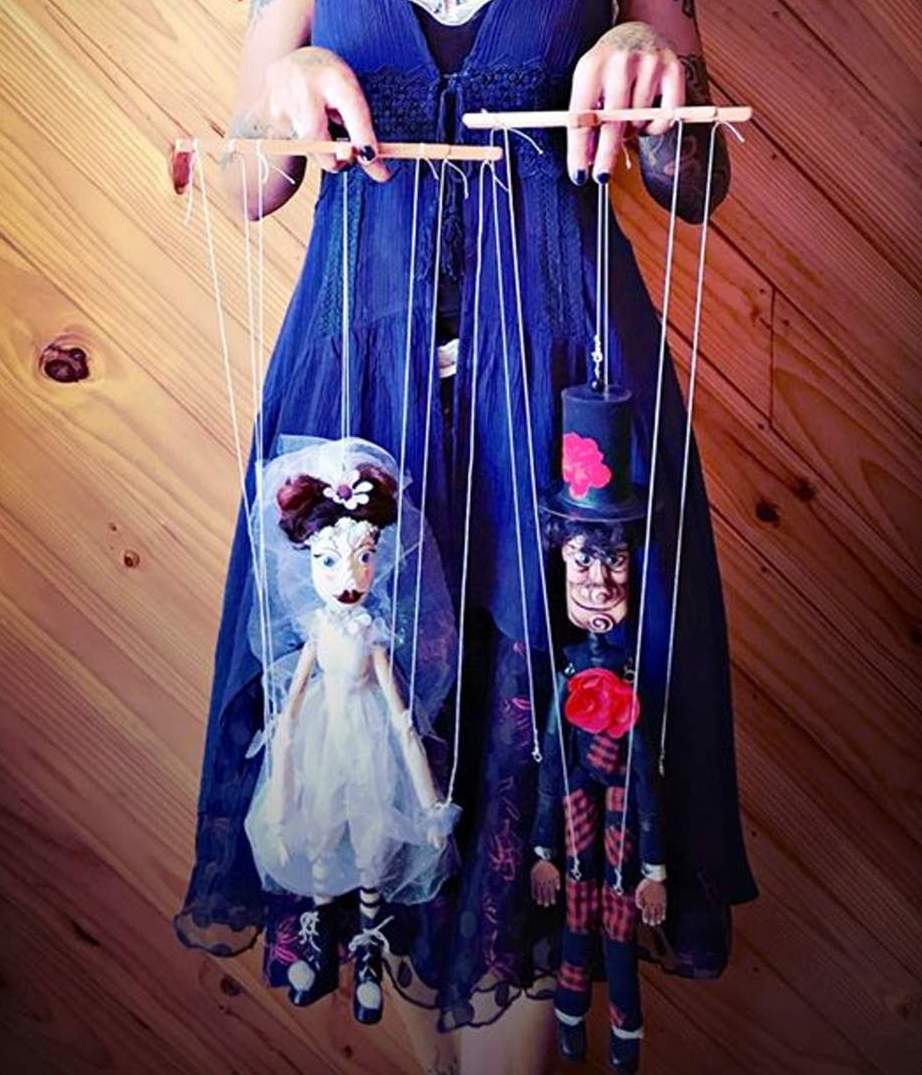 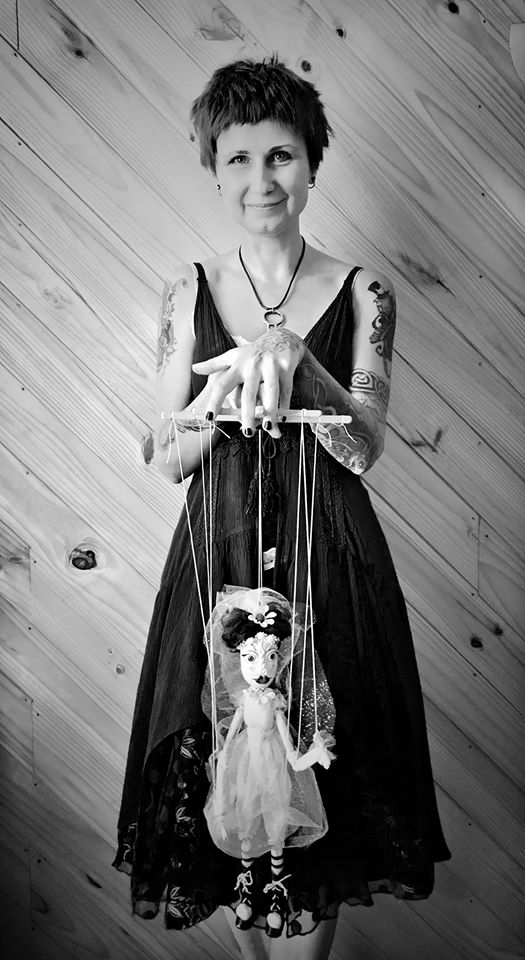 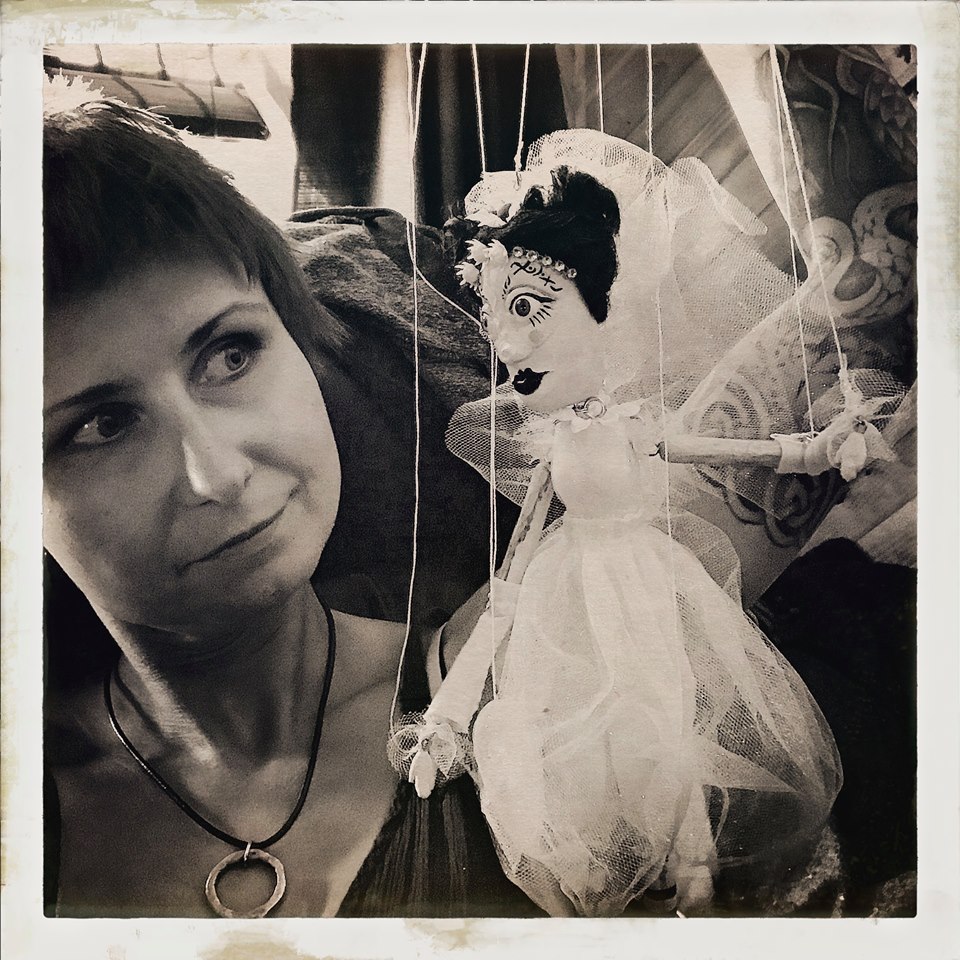 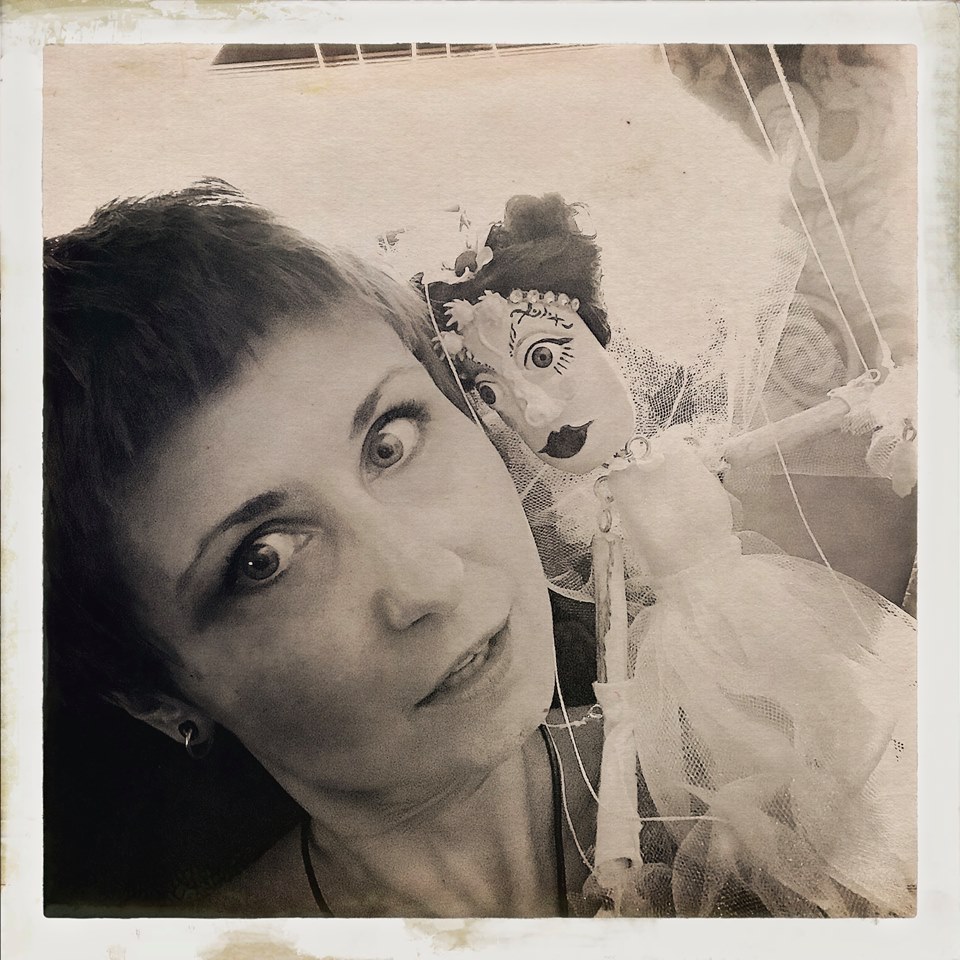 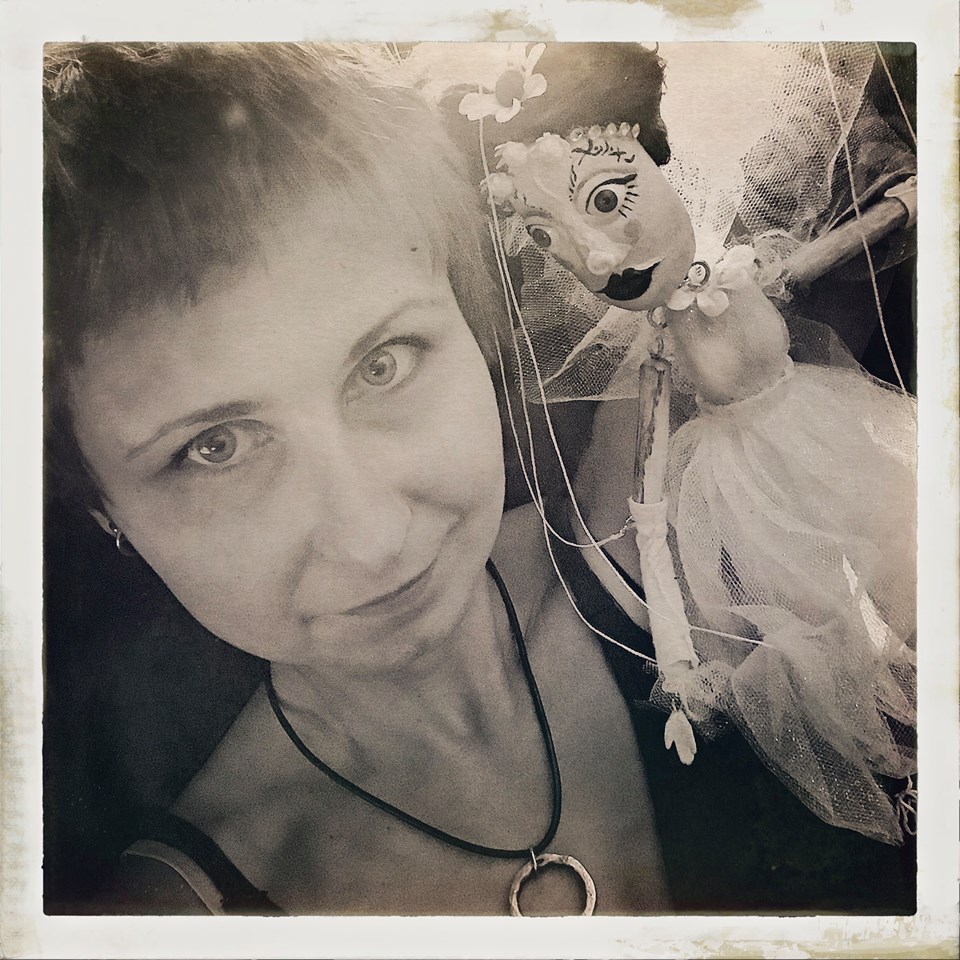 I hope that you enjoyed this little behind the scenes peek at the creation of my two favorite dolls to date. If you have friends, family, favorite celebrities, pets, or even imaginary friends that you would like to see immortalized as dolls or marionettes, please don’t hesitate to reach out to me for a chat. You can send me a direct message on Facebook at my shop Nights And Mares Toys. I am always happy to hear new ideas and take on new challenges.