“Truth and knowledge… arise out of observation and experience rather than manipulation of accepted or given ideas”. – John Locke

Over the years numerous people have asked me to teach them how to draw. I have taken on many students only to have my theory that anyone can be taught any new technical skill proven wrong over and over again. Yet, I still stand firmly by my belief. I truly think that anyone can be taught basic drawing skills which they can develop into more artistic forms of visual representation. Why is it then that most of my students, for whom I have set aside time slots and designed personalized lessons crafted after my own curriculum in university, gave up on the idea of learning after just a few sessions, declaring that they are beyond hope?

The truth is, you can not teach someone who is not willing to be taught. Most people who are mesmerized by the concept of creating beautiful drawings want to suddenly and magically be able to do the same. What they don’t want is to go through a lengthy and challenging process of learning. Differentiating between these two concepts is essential in understanding your potential students and deciding which ones are worth investing your time in. When one truly gives in to the learning process one accepts his or her current incompetence in a given subject with humility. If your student is not able to embrace the fact that they have no sense of proportion, or the concept of a color wheel, or are otherwise unable to sketch using only light and shadow, they will not allow themselves to be taught. Phrases like “I just can’t draw”, “I can never be as good as you”, “I have no sense of depth” are all red flags that your student is looking for justification to not learn. No, they cannot draw. Yet. No, they will never be as good as thousands of other people. Irrelevant. When I began my pilot training, I never dared say to my instructor “I cannot land as well as you can.” Instead I embraced my clumsiness, and only in honestly observing my mistakes was I able to correct them until one day I was as good as my instructor. The same principles apply to any type of learning. The first step is letting go of your insecurities.

Having identified the type of student I am willing to work with, I recently made another surprising discovery. I found out, through experimentation, luck and socializing, that people acquire drawing skills far better when they learn passively then when they are expected to appear at scheduled sessions and are bombarded with theory and rules. Through social networking and my various art-focused groups, I have met people who are naturally drawn to artistic expression. After observing me for some time, recognizing me as a friendly and nonjudgmental entity, they eventually reach out to me with questions. I encourage everyone in my adult coloring circles to give drawing a shot. Many are timid, but eventually curiosity prevails. When they are not satisfied with what they have created they ask me specific questions on how to do better next time. Next time being whenever the muse may strike. There are no lessons here, and the advice I give them is specific to what I see in them. The key word is advice, not rules, not technique, not some super secret art method, just guidance. I may, for example, notice that an individual has an eye for composition, but is not very strong in realism and detail. Well, then realism and detail are irrelevant at the moment. Let’s focus on composition. Let’s simplify her style to basic line work and play with that. It is important to start learning by picking up on the things one is naturally good at. Pursuing that will give one a positive boost and encourage him or her to keep learning. After several drafts of various composition experiments, my student suddenly feels more confident and is ready to take on a new challenge. Let’s, for instance, add some shadows now, to give the characters some structure and depth.

The key ingredient to learning artistic skills is having fun doing it. Part of enjoying learning comes from not feeling burdened by expectations. I never give my students an object and expect them to copy it perfectly. There is certainly room for photorealism in the art world, but it is by no means the measuring stick of talent. Instead, I encourage my students to find their own style, working with their natural strengths, and to create original art using that object as guidance. Those who are truly willing to learn will find their way, using only minor pushes from me in a productive direction. Margolet, for example, is one of my newest friends who occasionally asks me for artistic advice. She was shy in sharing her first drawing based on a vintage photograph that several of us are working with in the Vintage Drawing Coven. It was immediately obvious, however, that her strength is in line work and character presentation. She stripped the image to its bare minimum, leaving out the background and the details of the dress or the curls of the hair. While it may seem simple to some, minimalistic representation is actually quite difficult to achieve, and even more difficult to teach. She clearly has an eye for it and I want to encourage her to pursue this drawing style without being distracted by fabric folds and eye shimmers. She is ahead of the game in that she looks at the object as a whole, while many beginner drawers are seduced by perfecting detail. Even when she decided to add shadows for a more three dimensional look, she placed those sparsely and wisely.

My other very good artistic friend, Malakiah, already had a clearly defined drawing style when we met. The only advice that I give him tends to be about art psychology rather than technique. I like to push Malakiah in various creative directions and not limit him with rules, colors, or subject matter. Instead I plant simple ideas in his head and watch them explode into creative brambles. Our latest experiment was with overcoming artist’s block. Malakiah has an hungry artistic mind that needs to create all the time. He works fast and he creates a lot. It is inevitable for someone this engaged in his craft to occasionally run out of inspiration. He came to me one day asking for an idea, a subject matter for his new drawing.

Artist block is an awful and emotionally draining beast. Knowing that achieving a single goal produces only momentary satisfaction and one needs the pursuit of a goal to experience lasting happiness, I began brainstorming with Malakiah. After a few minutes of chit chat about his characters we began talking about the way he draws human eyes. Eyes are very important to this artist. He tends to make them unrealistically large on most characters, or even give characters nothing but eyes. So I gave him an assignment. A challenge rather.

For a whole month he was to focus on nothing but eyes. Draw the same eye over and over again, in different light and using different media, insert eyes into old drawings to see what happens, eyes, eyes, eyes. “Eyes is what your world will be about for the next four weeks.” The results were astonishing. The quest for eyes kept him engaged and experimenting, and by the end of the month he had picked up several new tricks of the trade, learned how to use and enjoy colors, and continued to create new and original art, moving on from eyes but focusing on the lessons learned.

This passive style of teaching appeals to me a great deal. I have always enjoyed being “the man behind the curtain” so to speak. In high school, I was responsible for theatre light and sound effects. I took over that job from a graduating senior named Ishmael. For the next four years I spent a significant amount of time in the darkness of my effects booth, running most of the theatre productions. The transition to a new effects operator was so smooth that most people never noticed that Ishmael was now a younger white female. The theatre professor, Ms Knox, refused to acknowledge my presence all together. Even though she knew full well who I was and what I was doing, she would still scream out “Ishmaaaaael, liiiiiights”  every time she entered the theatre for a rehearsal. Every play bill had a “light and sound effects by Ishmael” line still printed on it year after after year. I enjoy being an “Ishmael” to this day. I do not need a classroom full of students in a university with a fancy name. I feel true gratification from knowing that somewhere out there, some people whom I will probably never meet in person, are making beautiful drawings and are evolving as artists and as human beings partially because I am able to guide them in their artistic quests. 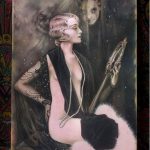 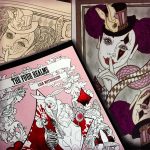 Next Story:
The Four Realms flip-through (blank vs colored)